In the national standard, small circuit breakers are divided into A, B, C and D types according to time-current characteristics.

Type A circuit breaker: 2 times of the rated current, rarely used in the market, generally used in semiconductor circuits. Because of its big size, it was replaced by a fuse.

Type B circuit breaker: 2-3 times of the rated current, used in secondary circuit of voltage transformer.

Type C circuit breaker: 5-10 times of the rated current, which is commonly used in our lives, generally used for home and project construction.

The so-called multiple current is actually anti-shock current, given a certain time to switch the trips, the characteristic is to avoid the shock current.

Small circuit breakers are usually less than 100A. 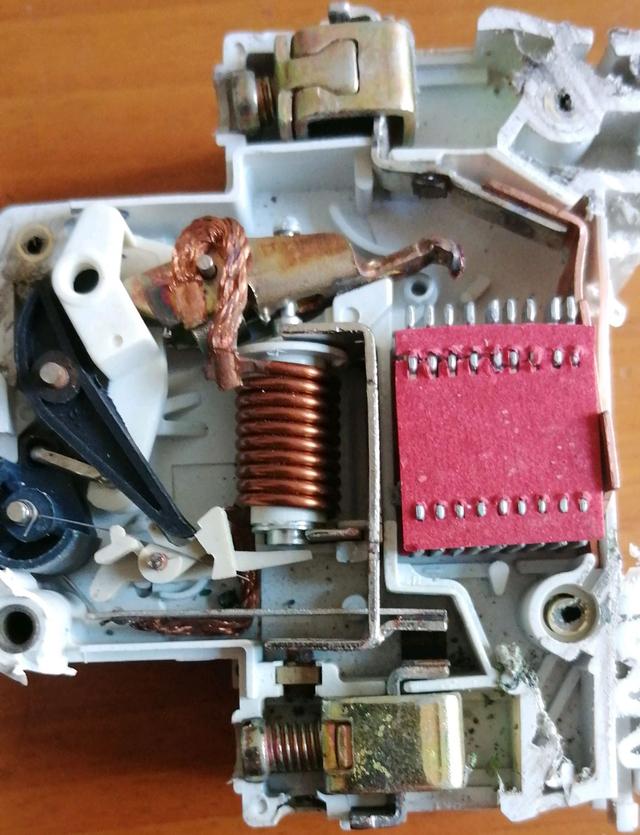 As you can see from the picture above, the miniature circuit breakers have two types of protection: short circuit protection and overload protection. Both types are connected in series in the circuit.

Overload protection: at the bottom of the image above is an overload protection that uses a bimetallic plate to raise the temperature and lead to the difference of the Coefficient of thermal expansion, causing it to bend and push the release mechanism to act, eventually causing the circuit breaker to trip. What’s in the picture should be an act that a long piece of metal is bending upward to drive the release action of the mechanism .

The bimetallic plate bends differently depending on the current flowing through the miniature circuit breaker. According to the standard (time-current characteristic) , the release time for 1.45 times current should be within 1 hour.

According to the F=IN (suction is proportional to the product of current and turns), the number of  turns of the instantaneous release coils is small, usually less than ten and are connected in series in the circuit. The normal operation of the circuit is due to a small number of coil turns and insufficient current suction. When a short circuit occurs in a circuit or device, it can generate several or even dozens of times more current than the working current. The coil turns remain the same, the current increases several times to dozens of times, so the suction also increases several times or even dozens of times respectively, this can make the circuit breaker trip within 0.1 second.

Small circuit breakers also have an important component which is the arc-extinguishing grid. At the moment when the open and close switch of the circuit breaker contacts, there will be a larger arc. The rapid extinction of arc to reduce the bad effect of it is realized by increasing the heat dissipation area and arc releasing space.

We already know how to use two types of protection of miniature circuit breaker to judge the fault.

If a circuit breaker is used as a long-term switch, the contact inside it does not work easily, we will only hear a sound. At this point, we should replace the circuit breaker immediately to prevent the accident from spreading.

Prev: How does an emergency stop button work?
Next: Basic introduction of miniature circuit breakers