There are many air circuit breakers in the distribution equipment of high-rise buildings, which are generally used as low-voltage main switch or branch circuit switch with large capacity, which plays a very important role in the power supply system. Once the fault occurs, it will cause large-area power failure and economic loss. The following through the maintenance work of some examples to illustrate the air circuit breaker operation fault analysis and treatment methods.

Non accident trip refers to tripping without short circuit and overload fault. There are many reasons why the air circuit breaker can not be closed. First of all, it is necessary to determine whether the trip is caused by the short circuit and overload of the circuit, or due to the fault of itself or the control circuit. The following are the steps and methods to find and determine whether it is a line fault or an air circuit breaker fault. 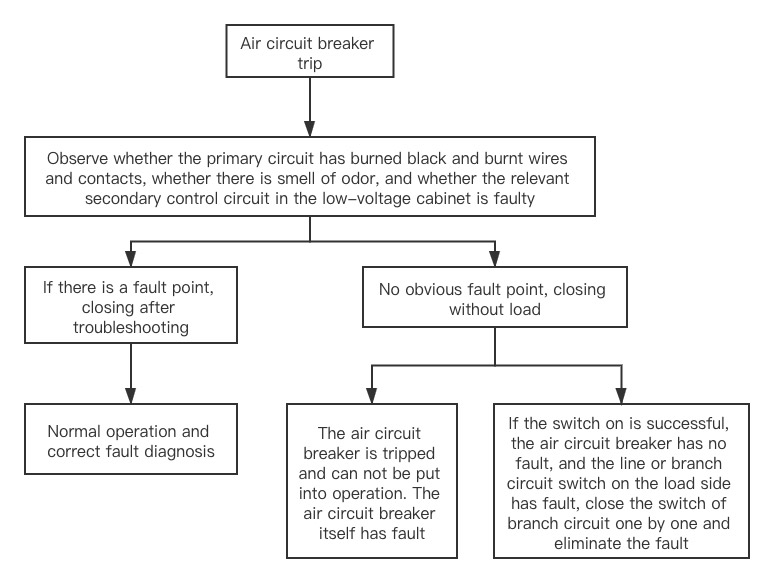 The fuse of protection circuit, such as RT14, is fused, causing circuit blockage and power failure of trip coil of undervoltage tripper.

Broken wires and loose crimping screws in the circuit will also cause the circuit to be blocked and the trip coil to be disconnected.

Because the coil of under-voltage tripper is in power-up state for a long time, environmental pollution, inflexible engagement of armature or excessive air gap between iron core and armature are easy to cause excessive current, which will cause the tripping coil to heat and burn out and lose the function of tripping coil.

The above faults can be correctly judged through observation and simple inspection and testing. Therefore, once the fault is found, it should be eliminated in time. If the contact is loose, it must be tightened, the component is damaged or the coil is burned, it needs to be replaced.

After tripping and closing several times, the operating mechanism of air circuit breaker is severely worn and the following faults may occur:

If the motor drive mechanism is worn out, such as the worm wheel and worm of the ME switch are damaged, the operating mechanism of the air circuit breaker cannot be driven to buckle and close. The replacement of worm gears and worms is complicated and requires professional maintenance.

The wear of free tripping mechanism makes it difficult to close the air circuit breaker and easy to trip. Sometimes it just barely closes. In case of vibration, it trips itself. Sometimes once closed, it trips again.

At this time, the adjusting screw should be rotated to adjust the relative position of the tripping half shaft and the tripping so that the contact area is about 2.5mm^2. Replace the corresponding parts if necessary.

The failure of the air circuit breaker to break normally may be due to the following failures.

Mechanical failure of the button or poor contact of the conductor will cause the trip circuit to be blocked, which will lead to the deactivation of the shunt trip coil, the armature can not be pull in and the air circuit breaker can not be broken.

The tripping of air circuit breaker is affected by open or short circuit of shunt trip coil and blockage of armature engagement. Therefore, regularly check the shunt trip, remove the obstacles affecting the armature attraction, and replace the coils with open or short circuit in time to ensure that the air circuit breaker can be quickly disconnected when the circuit needs to be disconnected.

Undervoltage tripper often produces abnormal noise after working for a period of time. Oil and dust on working surface of iron core should be removed regularly. If short circuit ring breaks, it needs to be replaced.

2. Burning out of mini-motors

Failure of the limit switch can cause the mini-motor in the electric operating mechanism to burn out. If it is necessary to close the circuit breaker with the electric operation mechanism, press the closing button, the power supply circuit of the motor will be connected, and the motor rotates. After completing the energy storage or closing of the mechanism, the power supply circuit of the micro motor should be disconnected by the limit switch. However, it cannot be disconnected due to the failure of the limit switch, which will cause the motor to overheat and burn out for a long time.

3. Short circuit due to poor insulation

The insulation performance of air circuit breaker will gradually deteriorate after long-term use. If improper maintenance is carried out in ordinary times, dust accumulation on the surface of insulating parts and moisture erosion will accelerate insulation aging, which may cause short circuit between phases or relative ground during power distribution operation or when short-circuit current is cut off.Therefore, it is necessary to keep the insulation surface clean and prevent the insulation performance from deteriorating so as to prolong the service life of the circuit breaker.

After each short-circuit current cut-off, the air circuit breaker shall be checked as follows:

(1) Smoke marks on the main and arc contacts are wiped off with alcohol.

(2) If small metal particles form on the contact surface, they should be cleaned and smoothed.

(4) Check the contact pressure spring, if it fails due to overheating, replace it in time.

(1) Clean the metal particles and soot on the wall and grids of the arc extinguishing chamber. If the grids are welded or burnt seriously, they should be replaced.

(2) If the arc extinguishing chamber is damaged, it is not allowed to be used again and must be replaced.

(3) The newly exchanged arc extinguishing chamber should be dried before use to ensure good insulation.

Prev: What is a Buzzer?
Next: What is the difference between MCCB and ACB?